12 months ago - after a day of food shopping, stream paddling and a cheeky McDonald's tea with D,I felt a familiar twinge which would change all of our lives forever (and without doubt for the better!) 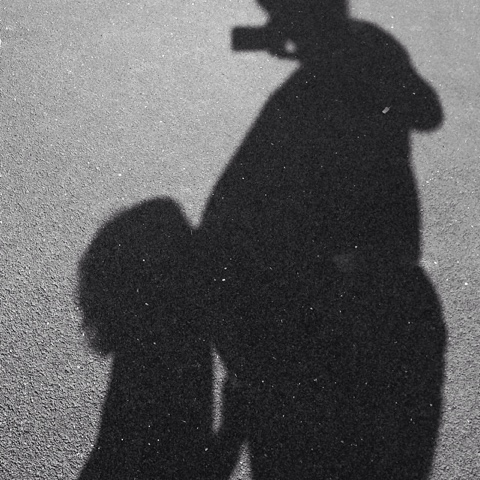 Just over 24 hours later, little legs, Miss Freya Pearl Robinson came into the world and you were pure perfection! 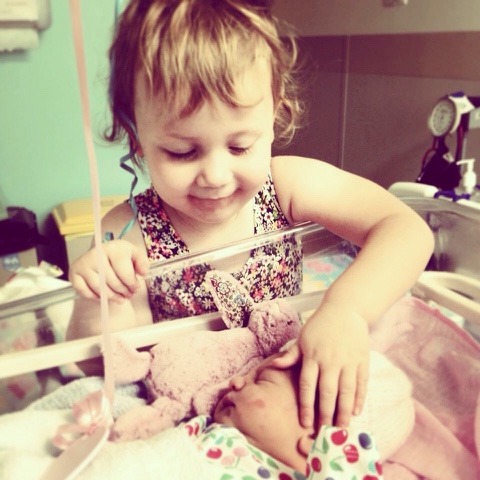 You have been an absolute joy ever since, never ending smiles, cheeky giggles and a twinkle in your eye which I know means life around you will never be boring 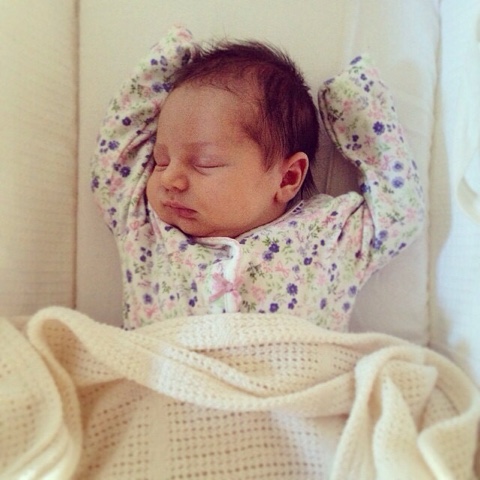 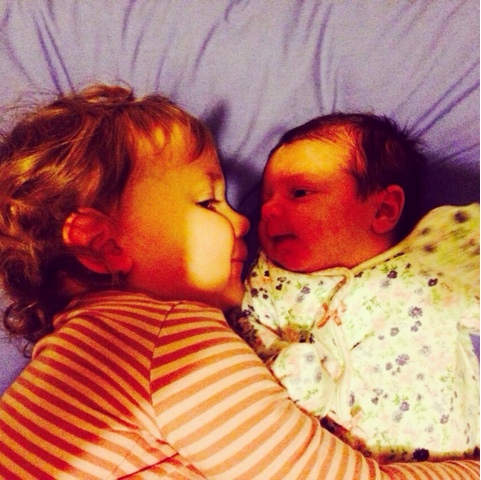 If there's music you'll dance, you'll literally groove to anything! 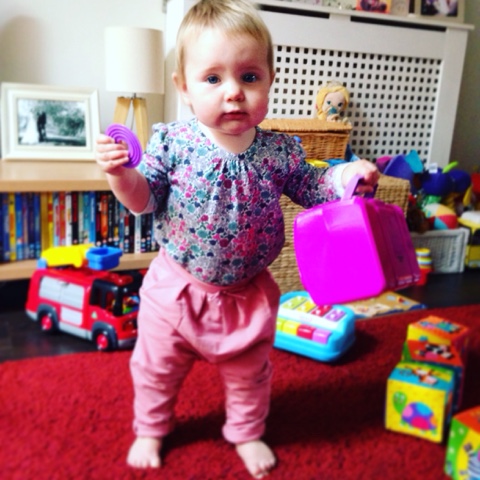 You love to talk, your first word was cat and you've now moved on to Tiger, Dada, hiya, (ba)nana, bye and yum!

You love a cuddle, you can literally be lulled into a sleepy coma by kissing those beautiful soft baby cheeks 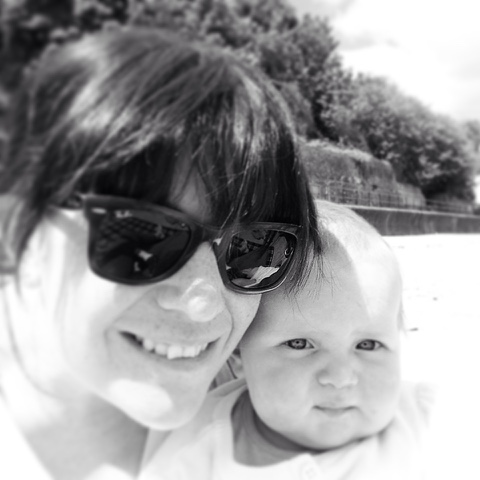 You've just started walking, although you still prefer to crawl and you can't resist climbing on everything 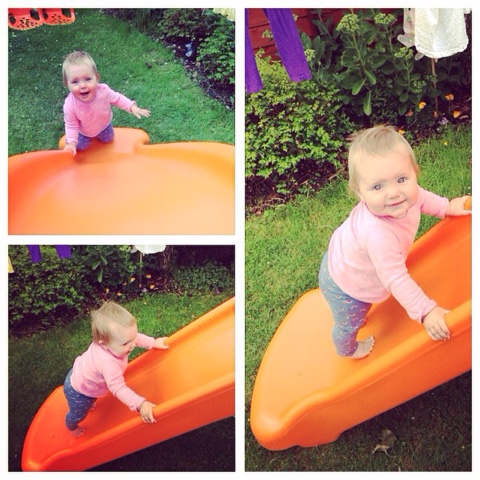 You're a little water baby and love to swim. Every lesson amazes me and I can't believe how brave and clever you are 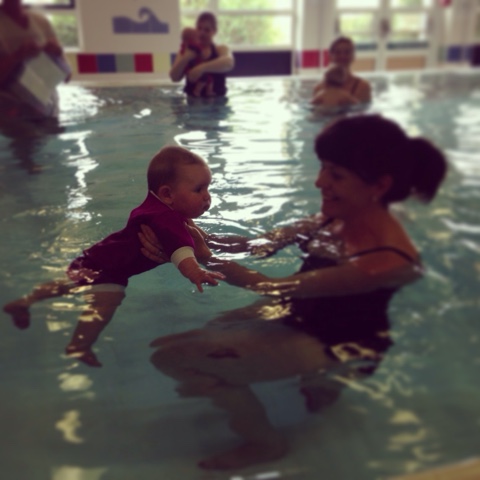 You have never ending energy, you're fearless and full of fun 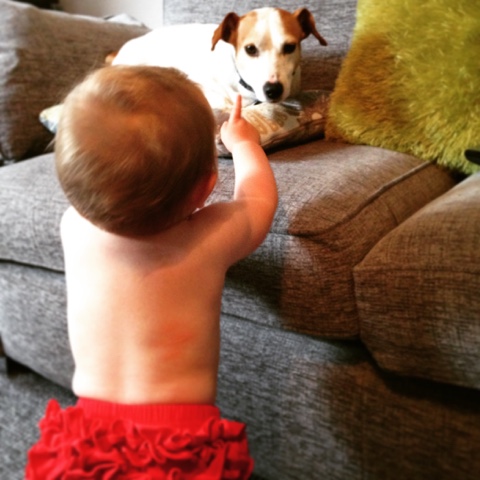 You are obsessed with the remote control, have been known to lick my shoes, and if the toilet seat is up - somethings going in! 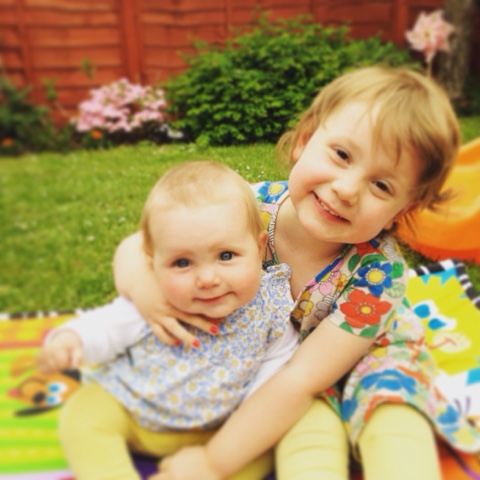 Tigers, bananas, swings, Mummy, Dadddy and Daisy - You have without doubt bought us ridiculous joy, laughter and love with a sprinkling of exhaustion and a bucket full of chaos but I quite simply wouldn't change a thing.

My beautiful, blue eyed, little legged monkey, I love you more than I will ever be able to say 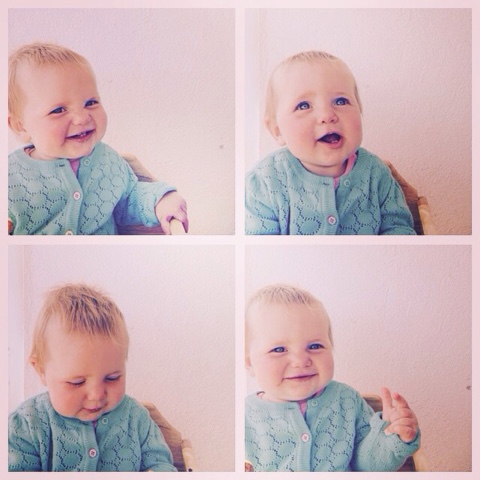 Ever since they opened CBeebies land at Alton Towers Resorts I've wanted to visit, with Daisy at the time and now with both Girls. Daisy is still a big CBeebies fan, her current fave is Mr Bloom and Freya has recently discovered the delights of in the night garden.

I'm been on maternity leave this summer and with my return to work looming and Daisy starting nursery in September I wanted to make an effort to make the most of our time together, taking lots of trips, visiting new places and of course sharing the good bad and ugly here on the blog

So when we were given the chance to visit CBeebies land we jumped at the chance, it would be the perfect last big day out for us as a family before the routines of work, school and childcare start.

Getting there and In

We arrived fairly early as we were on our way home from Visiting family in Cheshire so had no queues to deal with and headed straight in. Our first stop was to pick up a double buggy for the girls. Daisy normally uses a buggy board if she gets tired but we felt with the amount of walking we were likely to be doing she might like to have a sit down every now and then. It was actually one of the best £10 I've spent, the girls loved sitting together in the buggy and it meant we could take advantage of the rest of Alton Towers and have a good walk around. 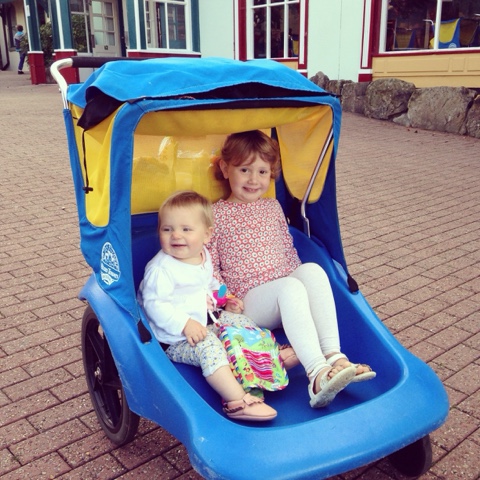 When you go through the main Alton Towers entry gates you can't miss CBeebiesland. The fabulous bright entry signs attracted the girls straight away and Daisy was very excited to be greeted by some of Mr Blooms garden helpers, The Mr Bloom attraction was definitely top of her visit list. We started by just taking a walk around and I have to say first impressions were great, the attractions are really high spec with great attention to detail. The kids loved walking round recognising all the characters and there were lots of staff around on hand to help if needed. The general vibe was really friendly and clearly aimed at the kids having a memorable day.

We discovered the Big Fun Showtime area, which is a fantastic open space with picnic benches, toilets, refreshment cabin and a live stage. The Zingzillas were doing a show so we stayed and watched that and afterwards the girls had a chance to meet the legend himself Mr Iggle Piggle - job done! Freya is a massive fan of Mr Piggle but i must admit did seem a little concerned at having him so close, maybe she was star struck ;) 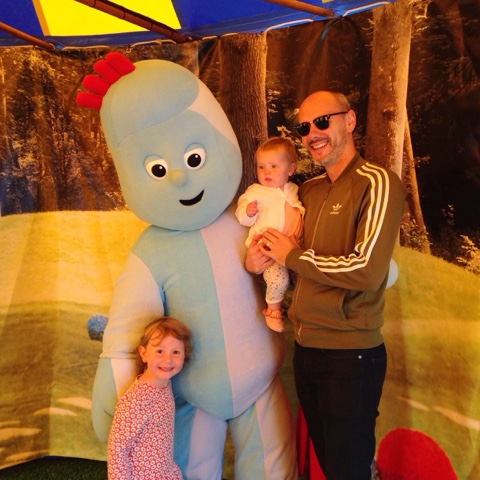 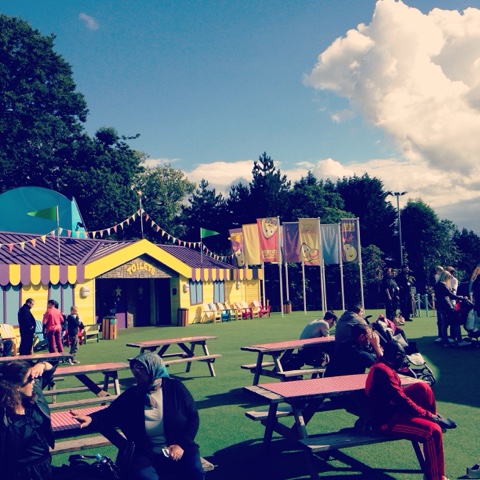 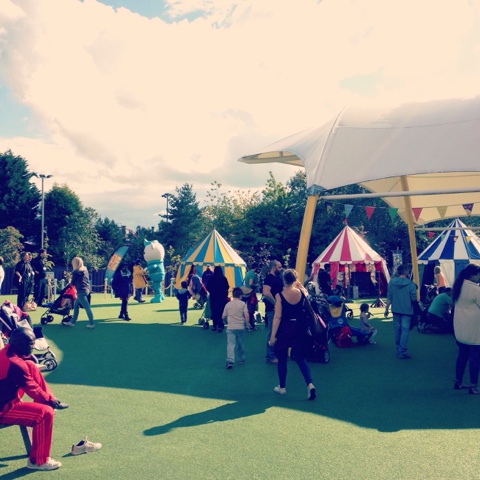 We'd heard that the In the Night Garden ride was particularly popular and as Freya has recently become a big fan we thought we'd head there first in an attempt to avoid the crowds. The queue was substantial but not too bad and we were on within about 10-15 minutes. The girls loved the boat ride around the Night Garden, Freya recognised some of her favourite characters and despite apparently being too old for Iggle and his friends Daisy loved spotting them as we traveled around. Getting off the ride however was less tranquil, Freya it seems wasn't ready to leave the Night Garden. Cue mini toddler tantrum! 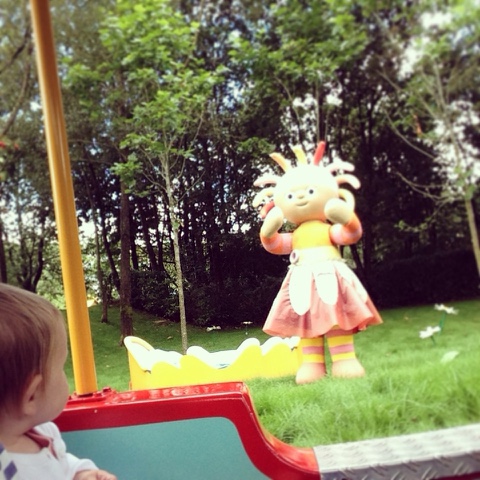 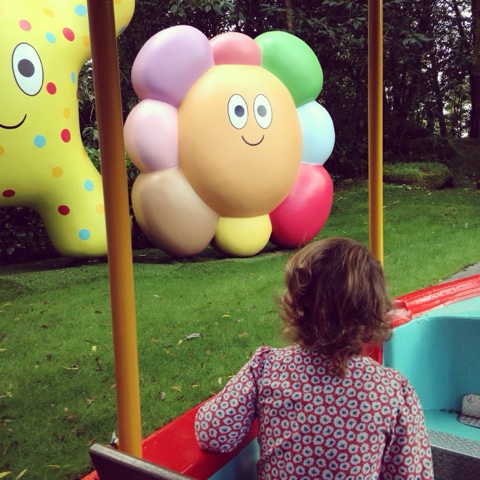 We then headed for the Postman Pat ride but sadly it wasn't working at the time so went over to the Tree Foo Tom ride. The girls struggled a bit with the queue this time as it took about 30 minutes but once we were on they loved it and the little monorail gave us the perfect opportunity to grab a birds eye view of the park. 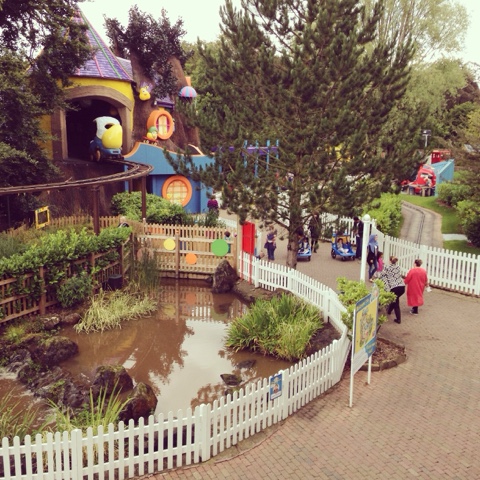 The girls were starting to get a bit tetchy by now so we headed for some lunch. After eating Freya needed a nap so we took the opportunity to have a wander round Alton Towers and go on a couple of the bigger rides. This was where the double buggy really came into its own as Freya slept in the carrier and Daisy was able to relax for an hour or two.

We then headed back to CBeebies land and went on a few more rides. The queues were a bit better by now (probably helped along by the on and off rain)

Finally then headed off to the highly anticipated Mr Blooms Nursery, Daisy loves Mr Bloom and despite being disappointed that he wasn't there in person she LOVED the interactive show and it really finished the day off perfectly for her. The 'tiddlers' had to find vegetables in the gardens to feed the compostarium, they met the Veges and helped ..... It was fab. 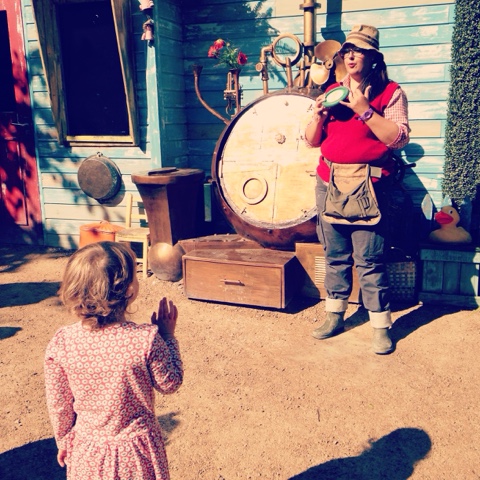 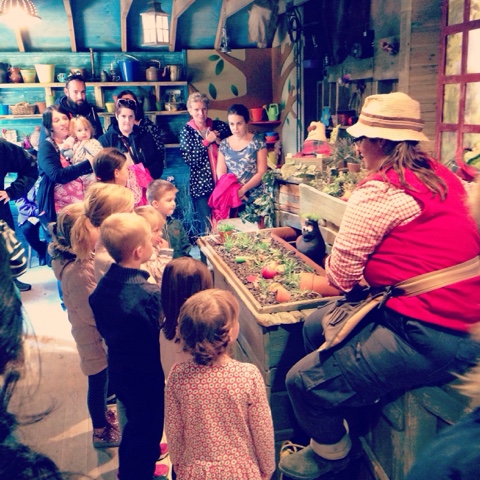 Last stop was the gift shop where Freya set her heart on probably the most expensive toy in the shop, a lullaby Makka Pakka. Seriously, saying no to that girl's enormous big blue eyes is a tough one and one step too far for a weary Mr R who crumbled and handed over the cash!

On the way back we stumbled into the ..... again for a final ice cream and bottle of milk for Freya while we sang along to another Zingzillas show - perfect 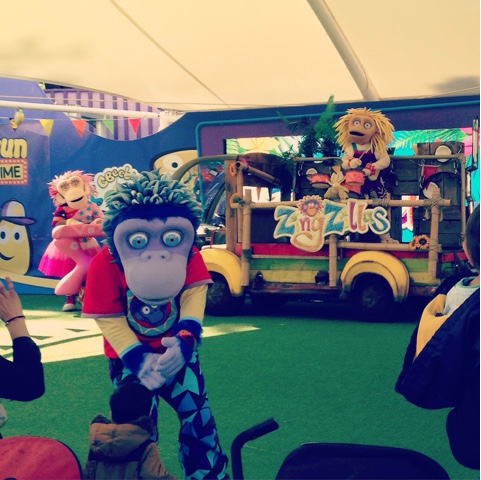 Going on a day out with a baby and toddler you're always on the lookout for decent facilities and those within CBeebies didn't disappoint. Clean toilets, good changing facilities and plenty of places for both healthy and naughty food snacks.

All in all we expected to have a great time and we weren't disappointed by our day at CBeebies land. The rides were great, attention to detail really high standard and I can only imagine it must be pretty amazing for those dinky girls we dragged along with us. Yes the queues are long but that's to expected of the big theme parks especially in the Summer Holidays.

Get there early as you will need a full day - there's loads to see and as most of the rides and attractions have queues getting round takes much longer than you think.

Talking of queues be prepared with snacks, drinks and things to entertain the little ones. Mine found some of the longer queues a struggle so something to eat or drink passed the time.

Even if your toddler / pre schooler is a regular walker consider the buggy hire, the park is large and you'll have so much more freedom if your not dragging a tired grumpy toddler around. It was also a great place to store coats / bags etc

If like me you have incredibly cute, persuasive children, best keep clear of the gift shops!

We were invited to CBeebies land for the purposes of this review but al words and opinions are my own.