The one thing I was dreading most about our first holiday abroad as a family was the flight, it was only 4 hours but I literally had no idea how we would keep F the energetic, stubborn little mountain goat in one place for 4 minutes let alone 4 hours!

I planned, I researched and I purchased to try and ensure a smooth flight where I would at least emerge with my nerves intact and not have the rest of the plane wanting to shove my little darling into the overhead storage

As it turned out the flight was a breeze, the kids were impeccable and I couldn't have been more proud *smug*

That said I know this wasn't without some careful planning and Im not going to be foolish enough to think it will be like this every time. So here are my top tips for preparing to fly with young kids and toddlers

1 - If your little one still naps, try and arrange it so they need to sleep during the flight, obviously you don't want to push them too far so that they scream the entire journey but we gave F a very early nap so that she would need another one later in the day and although it was only an hour it meant we had a little quiet time.

2 - We also used the airport time as a chance to let them run off some energy prior to boarding, there is usually plenty of walking opportunities and if you can, find a seating area where they can safely have a bit of freedom to stretch their legs as they will be sitting for a long time once you board

3 - Think about food - snacks can save a million situations so make sure you have plenty to hand. I took little boxes of raisons and things which would take a bit longer to eat to keep them occupied for longer. We also took a packed lunch with us as I knew there wasn't in flight food included and the stuff you can buy isn't exactly kid friendly. This meant that they also had a little plane picnic to keep them busy and kill some time. 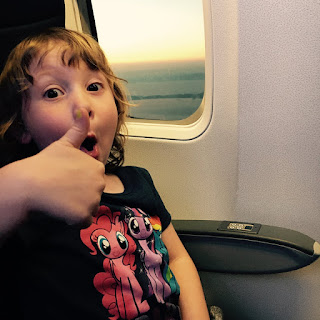 4 - I was particularly worried about how the kids would react to take off, whether they would be scared, whether their ears would pop etc and again I worried far too much as they did brilliantly. we concentrated on looking after one child each and ensured they were occupied and positive during the take off and landing. We had sweets and dummies at the ready in case their ears popped and I bought them both a little soft dolly which I whipped out of my bag just as we were taking off and this acted as a great distraction.

5 - Have plenty of activities ready to keep them occupied. I bought both the kids some new things which I kept hidden in my bag and bought out at intervals during the flight. My 4 year old had a new pencil case with an activity book, a small playmobile set and a new book. I also got my 19 month old a pencil case and drawing book, some toy cars and a book. F loves opening and closing things at the moment so this kept them both busy for a good part of the flight. 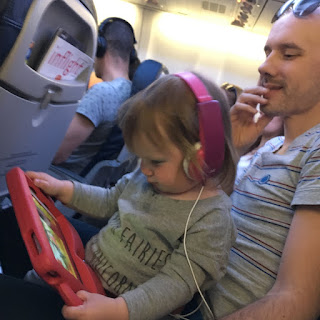 6 - Finally whether you love them or loath them don't under estimate the power of electrical devices. We took both the Leap pad and iPad on the flight and had some of their favourite shows downloaded ready to go. Our return flight was at night and although my 19 months old slept the whole journey my 4 year old found it hard to drop off so watching a few episodes of her favourite shows while lying down helped her relax and they both slept right through landing and had to be woken up when we reached the airport.

7 - Try to RELAX, I know that sounds easy but if your baby cries try not to be too bothered by those around you and just concentrate on ensuring you are both comfortable - rest assured yours won't be the only child making some noise on the flight and if you're lucky they won't be the worst!