So Daisy graduated from babydom and has enrolled in the school of mischief as a fully fledged toddler. Along with the amazing and frankly awe inspiring changes in her personality and understanding of the world around her, we have also started to witness some early examples of the so called ‘terrible twos’

The thing is, Daisy is generally a pretty chilled out little lady and the Robinson household is normally a fairly calm place, so I guess I didn’t feel entirely prepared for full on tantrums when they suddenly appeared (seemingly out of nowhere!). I have read that the brain goes through almost the same changes as a toddler as it does through adolescence so it looks like I may have to deal with this for some time yet and I guess I should just consider this training for the inevitable and slightly terrifying teenage years ahead of me.

What has occurred to me during this emergence of the Poppet's personality that we can spend so much time concentrating on the negative outbursts of toddlers that we don't realise they invest equal effort to their wonderful positive outbursts.

Daisy has a heartbreaking, tears-streaming-down-the-face sob that literally erupts from nowhere when things don’t go her way but then she also reacts with extreme (and sometimes seemingly disproportionate) excitement at the things which please her. A few nights ago Mr R asked her to show him her hair so they could wash it during her bathtime, I could hear the screams of delight from downstairs as she proudly showed her daddy she knew exactly where her hair is.

Her emotions are extreme at both ends and it puts that meltdown at not being allowed to eat stones in the garden into perspective when you realise the good things get the same heightened reaction.

I have always felt sad when parents use words like manipulation and control to describe a toddler's behaviour, I know for a fact that when Daisy is mid tantrum, she’s not thinking about me. At that point in time how her behaviour makes me feel couldn’t be further from her mind, she is simply overwhelmed by feelings which she hasn’t yet learnt how to deal with, and as her mummy I feel it’s my job to help her manage those feelings and get beyond them in a way which tells her it’s ok to feel sad or angry or upset and that I understand why she feels this way but we need to do x, y or z. I try not to overload Daisy with too much information but equally I feel just saying no doesn’t strike the right balance either. 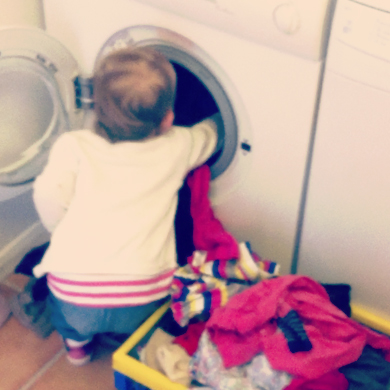 I also find that allowing her to be upset and show her anger means we get over that moment quickly so the day can be filled with those ear piecing squeals of delight when we see Billy the cat on the way to the childminder, those amazing happy feet she gets when she's allowed to help load the washing machine and my favourite of all, the big belly rub she does when she's overcome with excitement at playing catch!

We’re in the early stages of toddlerdom and I am sure I have much more to come and a lot more to learn so watch this space – I may not be so confident in 6 months time!
Posted by Unknown at 20:59