Those of you that read my blog will know we've been having a few problems breastfeeding my youngest. F had a posterior tongue tie cut at 10 days old and although she is better at latching she's struggling and we have made the decision to offer a bottle or 2 a day to top up and give me a break.

As those who have done combination feeding know the key to success is getting a good bottle which mimics breastfeeding (or at least as much as it can) to avoid issues nipple confusion / bottle preference etc. 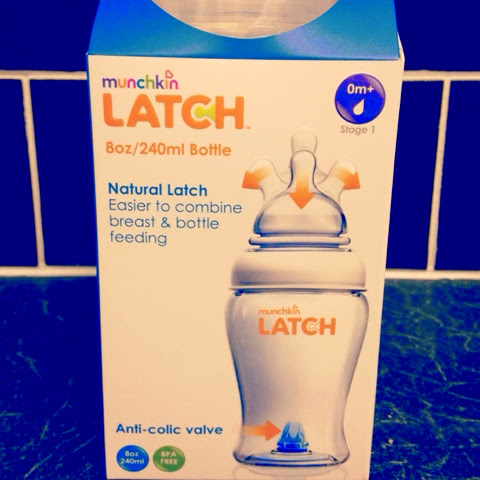 We were sent some of the newborn latch bottles by Munchkin to try and have used them for almost a week now - here's what we thought of them.

The Munchkin Latch bottles have an innovative accordion style teat which encourages baby to latch in the same way they would when breast-feeding allowing baby to control the flow of milk by adding pressure to the teat. The bottles also have an anti colic valve at the base which stops the flow of air bubbles when the baby is drinking.

One of Fs main problems with feeding from either breast or bottle is not latching correctly and taking in too much air which in turn was causes trapped wind and digestion problems. F would literally grunt and groan all night but with the Latch bottles she does seem 'hang on to the bottle better and appears to have less trapped wind so nights have thankfully been a little quieter and we've managed a bit more sleep! I personally love the shape of the teats on the bottles, the accordion sides move naturally as F does without exposing a gap and allowing air to be taken in and also doesn't require her to lay flat to finish the bottle as this causes her reflux to flair up. We've had no problems with 'confusion' and so far F is very happy to take from either breast or bottle and I think the similarities between the Latch teats and the breast shape help with this.

My only gripe with the bottles is as with the anti colic valve in the bottom of the bottle and without this valve there is a hole in the bottom of the bottle. Unfortunately on several occasions in our sleep deprived state both Mr R and I have forgotten the valve and poured milk straight into the bottle which in turn ends up leaking out the bottom. This is annoying at best but when it's your hard pumped expressed milk is a disaster! There really has been some occasions of crying over spilt milk.

Spilt milk aside we've been so impressed with the bottles we are considering investing in more and replacing the current brand we use.Finding a good bottle which allows us to combine breast and bottle feeding has becoming something of a personal quest at the moment and the Munchkin Latch have really looked at all the requirements and in my opinion come up with one of the best on the market at the moment.

If you like the look of the bottles head over to the Munchkin website as there's plenty of information about Latch as well as reviews from parents who are currently using them.

We were sent the Munchkin Latch bottles to review but all words and opinions are my own.
Posted by Unknown at 18:32