So those hazy days of summer are sadly behind and the BBQ and paddling pool have been packed away, but rather than wallow in the inevitable wet and rather gloomy weather ahead of us, I've decided to get on the festive bandwagon and start thinking Christmas.

Being from big families, Christmas has always been important to Mr R and myself. Lots of family time, food and let's not be coy about it - presents! We all love a present and as a kid preparing the well thought out Christmas list was a key part of the festive countdown. I've been pretty well organised this year and have bought most of Daisy's presents but I'm still in need of the very important stocking fillers. I loved my stocking as a kid and hope Daisy will do too, so when Kiddicare asked if I would like to review some of their fantastic stocking fillers range I jumped at the chance.

As suspected there was a brilliant selection and at great prices. I decided on three toys from the Buzzing Brains range as I felt they would both appeal to Daisy's interests and indulge my love for wooden toys and imaginative play. When we received the Wooden Building Blocks, Numbers Puzzle and Sing-A-Tune Microphone (not wooden, but I just knew she'd love it!) Daisy couldn't wait to get playing.

We were at my mums when she tried out the Sing-A-Tune Microphone and it was instant hit - singing and dancing in abundance - even the dog was expected to join in! The microphone is a great little toy, lots of buttons, sounds and flashing lights (what's not to love when you're two!). Daisy had no trouble using the buttons herself and loved entertaining us all. At £8.99 I can see this one making a fair few appearances over Christmas - and sadly probably not only by Daisy! 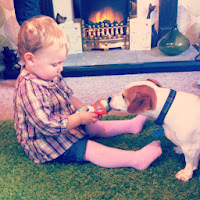 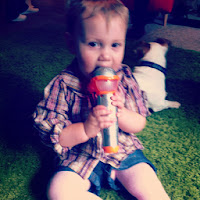 I chose the Buzzing Brains Numbers Puzzle and the bricks as I love traditional wooden toys - who doesn't? I wondered whether they would get a look in next to the flashing lights and jazzy music from the microphone but they have been a massive hit. The Numbers Puzzle is already a firm favourite, it's fun, brightly coloured and the pieces fit into the puzzle easily. There are pictures of fruit behind each piece which allows us to practice colours as well as numbers. Daisy really enjoys playing, and I get the satisfaction of feeling like she's developing and learning from it - everyone wins! The puzzle is £7.99 which I think is a fair price for a solid and well made toy. 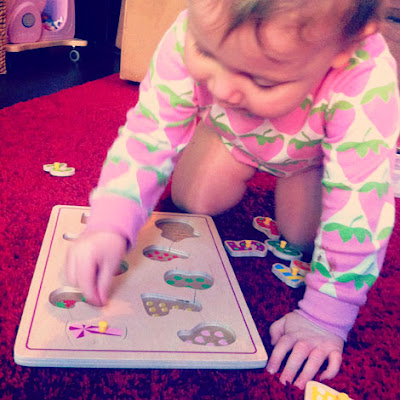 I saved the Wooden Building Blocks till last as these have been the most successful by far and have been played with every day since they arrived. What's not to love? Bright, colourful and classic! We've made towers, beds, animal pens - whatever Daisy is playing with the blocks get involved, I've already decided I'm going to add to them as she's enjoyed them so much. You get 50 blocks in the set, all different colours and shapes and so far they seem really good quality and haven't lost any colour despite the occasional chew! The blocks are £11.99 and I can see they are going to be worth that several times over with the amount of play time Daisy will get from them.

All three of these toys are within the Kiddicare 342 promotion which is running from the 5th November until the 2nd December. If you haven't done so already have gander, to say there's something every child would love is an understatement, I for one have a very happy little girl!

The Kiddicare 342 offer will run from 5th November 2013 till 2nd December 2013 in stores, online and via the Kiddicare app. We were kindly sent the above toys for the purposes if this review but all opinions are my own.
Posted by Unknown at 22:26